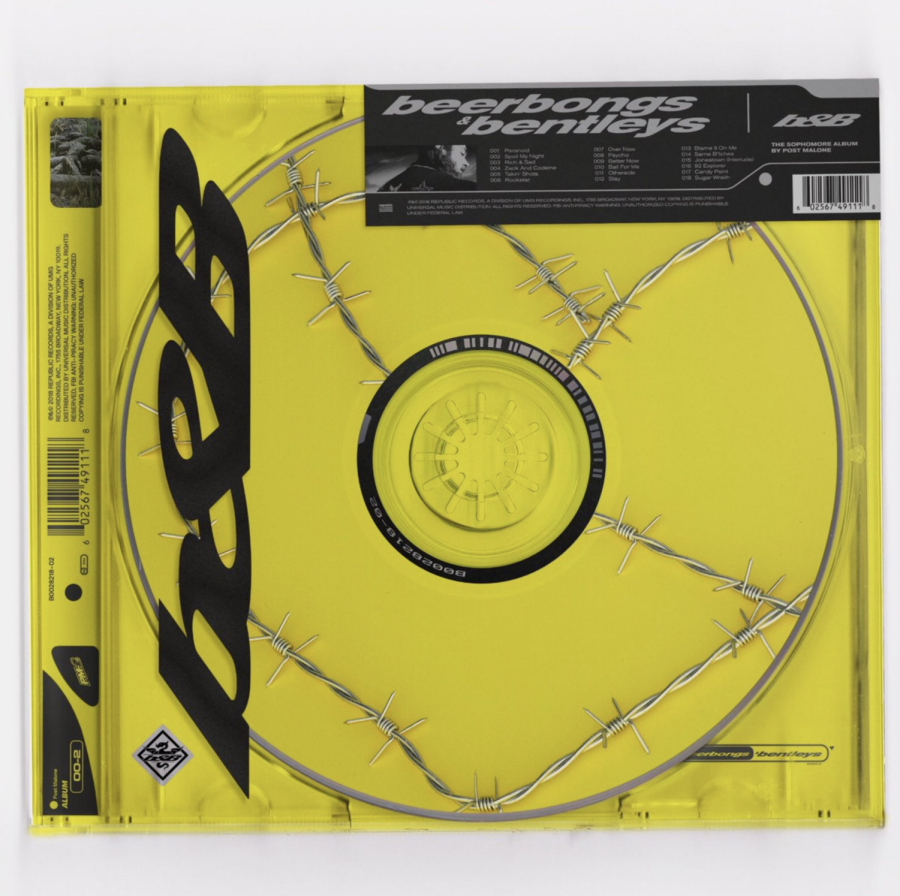 Post Malone released his sophomore album “Beerbongs and Bentleys” on April 27, 2018. Four days after its release, it was certified Platinum. Billboard projected it to surpass the record for most streams in a week.

This new album is very different from “Stoney,” which catapulted the singer to the top of the charts. It gives off a vibe that this generation’s teens can relate to, including the highs and lows of dating and breakups. Post Malone reveals more of his sensitive side in this album as he raps about getting over heartbreak.

The interesting part of this album is his change from his previous album, “Stoney.” He went from “I Fall Apart,” in which he raps about getting his heart broken, to “Better Now,” where he raps about him being better off now that that relationship is over.

The lead single “Psycho,” which features rapper Ty Dolla $ign, is about his paranoia that his friends only want him for his fame or his money. It is catchy and has a fresh attitude. A lyric from the song, “Can’t really trust nobody with all this jewelry on you” shows his trust issues.

The most popular song on this album, “Better Now,” reached number one on the Spotify US Top 50. The lyric,“You know I say that I am better now, better now. I only say that ’cause you’re not around, not around” shows how he hides his pain from losing the love of his life and being let down. It has a more somber vibe, but a catchy beat.

Although Post Malone has a ton of money, he still does not have happiness. In “Rich and Sad,” he sings about how he would rather have a meaningful relationship than money. “I would throw it all away, I just keep on wishin’ that the money made you stay.”

“Zack and Codeine” is a play off of the popular Disney show “The Suite Life of Zack and Cody.” Coming from a “multimillionaire by the time he is 23,” Malone sings about expensive cars and riches.

In “Paranoid,” Malone sings about his anxiety and loneliness.  “And I wake up everyday. I wake up every day. With this anxiety.” It is very common for rappers who sing about their issues to have anxiety or depression, and Post Malone is not any different. Another famous artist, Logic, raps about his battles with mental illness in his music, notably in his song “1-800-273-8255.”

In “Over Now,” Post Malone breaks up with a materialistic girl who only cares about designer handbags. The lyric,“Begging on my knees on to the floor. Now I don’t even want you anymore, anymore. It’s over now,” shows when he realizes that this relationship is destructive.

“Stay” appears to be about Malone’s struggle to maintain a relationship. It has a slower tempo and features guitar strumming. They lyric,“Can we have a little conversation? Figure it out with no intoxication. We carry on, what is our motivation?” describes a relationship where there is only a physical connection but no emotional connection. He wonders if there is a reason to stay.

Malone sings about getting hurt in the gut-wrenching single, “Blame It On Me.”  “Watchin’ me bleed. You cut me down on my knees.” shows how he blames himself for getting hurt in a relationship.

“92 Explorer” is titled after Post Malone’s 1992 Ford Explorer and he sings about his lavish lifestyle and spending habits. It has an interesting beat, a fast tempo, and a fun mood, especially when contrasted with some of his deeper songs.

Not a Typical Rapper

Post Malone has stated in interviews that he does not a want to be a typical rapper, and he accomplishes this goal by pushing the boundaries of hip hop in his newest album. His music is emotionally intense, and his songwriting is about issues that he experiences, like pain, heartbreak, and depression. This depth sets him apart from other artists and makes him a constant success. You will not see Post Malone disappearing from the top charts anytime soon.