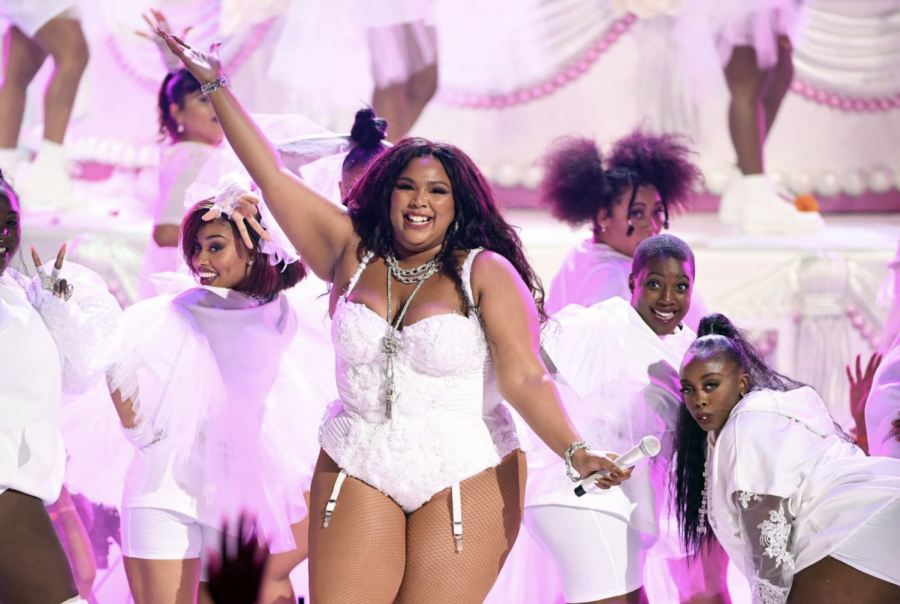 Who is Lizzo, the rap artist who has topped the Billboard Hot 100 chart for four weeks and soared to fame? She is an American rap artist who belts out high notes on her smash hits that have garnered over 18.9 million streams, according to Rolling Stone. The talented singer can perform all genres of music, whether it may be rap, gospel, or pop, she can also play the flute like nobody’s business, and dance like she owns the stage. Lizzo’s album, “Cuz I Love You,” sends a positive message of self-love, body positivity, and female empowerment.

With its upbeat lyrics, powerful message, and vivace tempo, “Truth Hurts” topped the pop charts this year. Lizzo raps, ‘“I just took a DNA test, turns out I’m 100% that [woman], even when I’m crying crazy. Yeah, I got boy problems, that’s the human in me. Bling bling, then I solve ’em, that’s the goddess in me.” She describes being a queen; it’s shocking that Lizzo has boy troubles, but it seems like it’s her only flaw. Lizzo’s iconic music video for “Truth Hurts” depicts her getting married to herself. (Yes queen!) “Truth Hurts” was featured on the Netflix original, “Someone Great,” sung by actress Gina Rodrigues.

“Juice” by Lizzo is about being confident in your own body and owning who you are. Lizzo raps,“If I’m shinin’, everybody gonna shine (yeah, I’m goals). I was born like this, don’t even gotta try (now you know). I’m like chardonnay, get better over time (so you know). Heard you say I’m not the baddest [woman], you lied.” In this lyric, Lizzo is shining in her complexion, being effortlessly proud in her own skin, and showing off how she feels about herself. The “juice” that Lizzo is describing symbolizes her outgoing personality and bright mentality. “It ain’t my fault that I’m out here makin’ news. I’m the pudding in the proof (puddin’ in the proof). Gotta blame it on my juice (blame it on my juice).” The feel-good anthem shows off Lizzo’s powerful vocals.

Lizzo’s “Like a Girl” is a pop rock anthem about what it means to do something “like a girl,” whether it may be run for president or set your own precedents. Lizzo raps, “Feelin’ bossy in my city. ‘Cause I run it like a girl. Run it, run it like a girl. I work my femininity.” Lizzo describes running her city “like a girl” and embraces her inner superwoman. The song is a tribute to female empowerment and gender equality. In the song, Lizzo honors two greats: trailblazer Lauryn Hill and tennis champion Serena Williams. Her lyrics allude that she hopes to teach young girls that being a girl is a superpower and they can do anything they set their minds to.

“Soulmate” is all about being your own cheerleader and loving all that you are. Lizzo raps,“’Cause I’m my own soulmate. I know how to love me. I know that I’m always gonna hold me down. Yeah, I’m my own soulmate…I know I’m a queen, but I don’t need no crown.” As a proud supporter of the body positive movement, she encourages unapologetic self love and tells her fans that they do not need to be in love with anyone but themselves. She teaches her listeners what true love means: to be loved by yourself.

Lizzo’s music is reminiscent of Missy Elliott and Queen Bey. Her music is not only melodious, but uplifting and inspiring. She is a symbol of hope to any girls around the world and she demonstrates that she is a versatile artist, creating music across among different genres. Recently, she performed at the 2019 BET Awards. Whether you listen to her music or not, one thing is certain: Lizzo is not disappearing from the top of the charts any time soon.