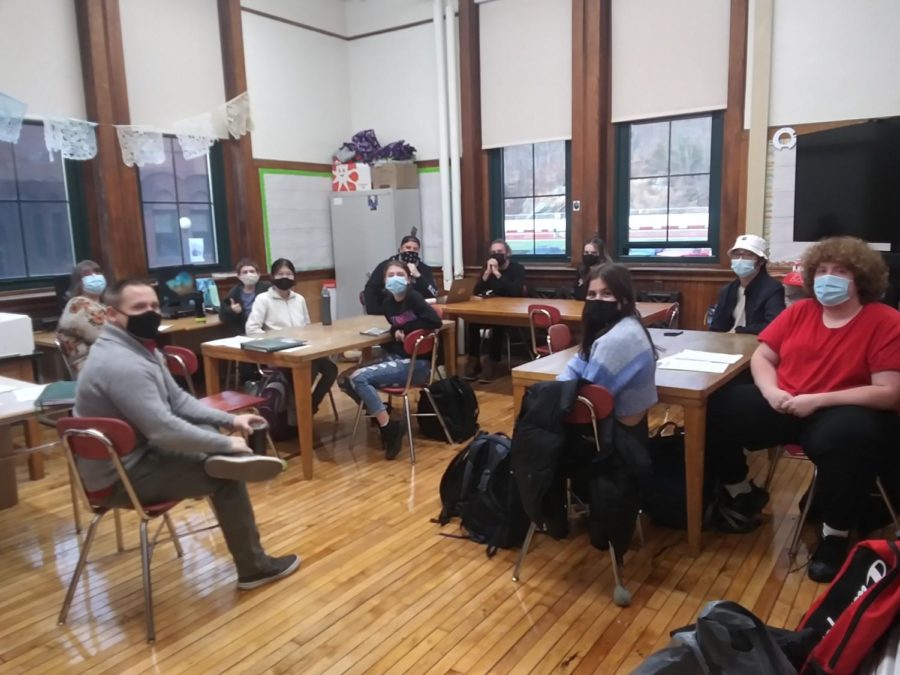 The NFA Prevention Council at a meeting in Mrs. Savage's classroom.

If one were to travel to NFA’s campus 50 years ago, they wouldn’t hear of in-detail substance use education for youth, nor reports of vaping. But now, in the 2021-2022 school year, teenage drug use has become a noticeable issue, and bathrooms have needed monitoring by NFA Campus Safety. The NFA Prevention Council, led by Mrs. Jodi Savage, is tackling the current topic of underage drug prevention, so that any impressionable NFA students do not fall prey to potentially harmful habits.

The purpose of all prevention councils is to provide education about preventative topics. According to Rayallen Bergman, Prevention Coordinator at Norwich Human Services, a few examples of preventative issues include substance use, gambling, and suicide prevention. Bergman states that prevention is about asking, “How do we avoid risk-taking behaviors and how do we kind of lean towards those things that can keep us occupied or keep us in making more appropriate and better decisions for ourselves?”

It is important to acknowledge that while the pandemic has decreased certain areas of drug use – likely due to lack of opportunity to receive the drugs from individuals outside the household – overall levels of teenage drug use are still very high and on the rise. The pandemic has contributed to a universal decrease in adolescent marijuana use, with national rates in 2021 dropping 12% for 12th graders, dropping 34% for 10th graders, and dropping 31% for 8th graders, according to an article detailing research conducted by the University of Michigan. However, national drug use levels (including drugs more dangerous than marijuana) in adolescents are still high and increasing, with the National Center for Drug Abuse Statistics reporting that “Drug use among 8th graders increased 61% between 2016 and 2020.”

Mrs. Savage, current NFA Prevention Council Advisor, is an advisory board member for Norwich Youth and Family Services, a Norwich Heroin Task Force member, and was a member of Students Against Drunk Driving (SADD) at NFA when she was a student. She recognizes the necessity of prevention education for all youth. “The destructive decisions that students can make have grown overtime and so I think that it’s really important to know the dangers and also know how to get help and how to make better decisions in their lives.”

NFA has enforced measures regarding discipline for drug possession on campus. According to the Pilot, the NFA Student Handbook, a first offense for “Drugs – Possession of controlled substance, illegal prescription drug, restricted drug, and/or hallucinogenic” is a 10-day out-of-school suspension and a potential arrest. A second offense is a possible arrest and recommendation for a 90-day expulsion.

Despite this, there are a small number of students who continue bringing substances on campus. Knowing this, NFA has worked to promote education about drug use. In the past, the NFA Prevention Council has hosted school assemblies on vaping, opioid use, and recreational marijuana. Mrs. Savage recognizes the impact of these preventative initiatives on the NFA community. “A couple of years ago we had a speaker on the issues of heroin and the opioid crisis and I know for a fact that the conversation with him prompted several students to get help they may have needed for their family members or for themselves… so a lot of what we do does have a direct impact on students and their families.”

Given the global increase in teenage drug use in recent years, it has become essential to provide substance use education to youth. “We are seeing drug use, earlier and earlier in age. It used to be you only started out in high school, then middle school and now even elementary age students experimenting and dabbling in it so [it is] definitely important to start as soon as we can in prevention efforts and curriculum designed for each age group,” Mrs. Savage states.

However, stigmas and stereotypes build a wall against progress in drug education and prevention. Bergman explains that people tend to have established stereotypes of who is more likely to become addicted based on their socioeconomic situation, stating that it is crucial not to completely generalize who can get addicted. “Anybody from any socioeconomic level at any point and any background can develop dependence on it… What [stereotyping] does is it creates a hurdle that somebody has to jump over… [I’m] working in Norwich but if we went up to (a different town), it’s a different community, but if we carry those different stigmas about what happens there like ‘it’s their problem,’ that’s going to hinder our work with them.”

As long as someone is 21 or over, they are legally allowed to use recreational marijuana in Connecticut. However, while using, one must be aware of all health risks associated marijuana. Marijuana has been associated with increased heart rate, breathing problems, and mental health risks, according to the National Institute on Drug Abuse. Additionally, one of these health risks involves the contamination of marijuana with separate illegal and dangerous drugs.

In Connecticut specifically, there is a current risk with fentanyl traces in unsuspecting marijuana users, leading to a record number of overdoses. Fentanyl is a laboratory-crafted prescription opioid (a specific class of drug according to Johns Hopkins Medicine) meant to be used medically. However, fentanyl made illegally can be mixed into marijuana, cocaine, and other products without one’s knowledge to “increase its euphoric effects” according to the CDC, or Center for Disease Control and Prevention. According to a Norwich Bulletin article on fentanyl in marijuana, published on December 8, 2021, and written by Trevor Ballantyne, when Connecticut overdose patients were revived with naloxone (more commonly known as narcan), a substance to revive people from overdoses due to opioids such as fentanyl, several patients claimed to have only used marijuana, not fentanyl. It is due to this illegal mixing that occurs without the marijuana user’s knowledge that a portion of these patients had overdosed. Fentanyl can cause overdoses and death with small amounts, and according to the Norwich Bulletin, “In Connecticut, the Department of Public Health reported 1,378 fatal drug overdoses in the calendar year 2020 – a 14.6% increase from 2019, – with 91% of those deaths involving fentanyl.”

Bergman states that he was informed by the HIDTA program, or High Intensity Drug Trafficking Areas program, an organization that traces substances of concern, about the situation. “We did get that information out and we didn’t put it out there like the scare tactic. We wanted to be careful [of] the way we shared the information and knowing that it is happening, share the resources, share who to talk to for more information, also share emergency response, what narcan is, making sure [of] getting that step ahead making sure people [are] prepared for if that were to impact our community.”

However, underage drug use is still illegal and especially dangerous for young brains. Bergman reveals, “When they had the discussion last year about recreational marijuana, for adults over 21, what I think people got was that the substance itself is safe and they aren’t able to use it under 21 but what got lost in the message is a lot of those different impacts really hit and affect memory, IQ, it could be long and short term memory, and there’s a variety of different things like social development that it could impact too.”

It is important that students who witness drug use on campus report it to a trusted teacher or adult, Bergman says. “You don’t know what that person has taken in, and it can lead to certain concerns with other substances or some of the other things out on the street right now that could have a really bad reaction to it.” He expands by stating a student mindset should be, “Look, I love you as a friend, and I also want to make sure that you are here tomorrow, so let’s go and talk to somebody so that you have the help that you need.”

At NFA, the STOPit app is a phone application that allows students to report any inappropriate behavior that requires adult attention. This allows an anonymous resource for students to report this behavior in a way that protects their identity. NFA adults and administration have been encouraging students to use this if they notice any drug use or vaping happening on campus.

In the end, any progress in reducing underage drug use at NFA lies in the students. Both Bergman and Mrs. Savage have acknowledged students are crucial to the preventative process. Bergman states, “I think this is beyond what is a requirement for us to actively seek out a youth coalition group to do some cool projects with. I believe the main part is if we are trying to prevent youth from using substances or other risky behaviors, we clearly want to get their voice on what’s actually happening…. One conversation I had with a student really explained where one of the locations that they get alcohol underage from; I did not know that out of the two years I was working here.”

Mrs. Savage also states, “I am an adult walking through this campus and I see certain things, but the youth see something different, and we need to see that- we need to hear that. I think that is important (here) as well as in the community [because] our students are living in the community. What happens in Voluntown might not happen in Lisbon, but it might be similar too, so to have those perspectives of all the towns is necessary.”

Although the NFA Prevention Council’s current focus is underage marijuana prevention, they continue to focus on other preventative topics. A few of the NFA Prevention Council’s past preventative projects include an annual suicide prevention week, creating mental health programs for stress management, and participating in events such as World Youth Day and Family Day. They also run a podcast called NorwichTEENSPrevent where experts and local community leaders are brought in to share their expertise on preventative issues.

In an aim to reach the students who need education about underage marijuana, the NFA Prevention Council is currently planning a potential PSA (Public Service Announcement) from grant funding. They have been meeting monthly in Mrs. Savage’s classroom on the NFA campus and will continue to meet on the first Tuesday of every month. Interested students are always welcome to join the club by contacting Mrs. Savage at [email protected]

**There will be a podcast version of a portion of the interview conducted for this article with Bergman released on the NorwichTEENSPrevent. It will detail full answers and context about the purposes of a prevention council and prevention-related questions.