The Rivalry Continues: NFA and New London Meet Again For The 158th Time 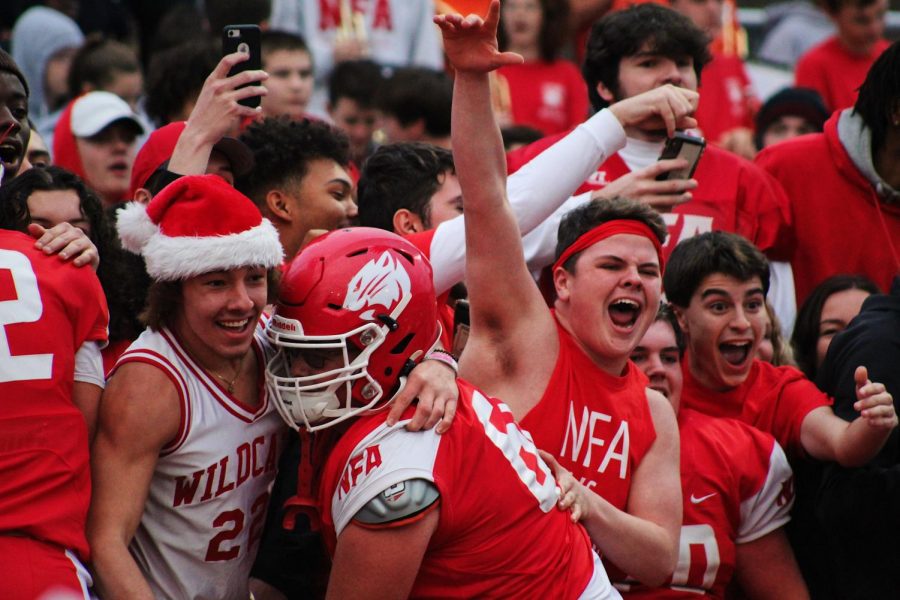 Two different towns, two separate teams, yet one colorful history. Every year, the members of the NFA Wildcats and the New London Whalers meet to partake in a tradition that expands far beyond their time on the turf.  On the eve of Thanksgiving, NFA’s head coach Jason Bakoulis and his 7-3 Wildcats emerged onto the Norwich Free Academy turf, ready to take on their famous rivals.

Bakoulis credits not only the Norwich community for motivating his wildcats, but members of the team itself.

“It’s tremendous excitement,” Bakoulis stated. “You go to a restaurant; you go to a grocery store, and it could be September, October, but when you get to the beginning of November, people see you in football stuff and say, ‘Hey good job.’  But when it comes down to that week, and they see you in the NFA stuff it’s like ‘Let’s beat them. We have to take care of business.’ [For us], it’s just us playing for each other.”

The rivalry between NFA and New London is the longest high school football rivalry in existence. Over the span of 158 years, hundreds of players have stepped onto the turf, and thousands of spectators have witnessed history unfold.

Sophomore offensive lineman Sam Sweeney experienced the energy of the rivalry game for himself for the first time Wednesday.

For the NFA student body, excitement still lingers from last year’s game, where the Wildcats walked away victorious with a  40-7 final. Last year’s win could be seen as additional motivation for the team, but for the Wildcats, motivation comes from recent performances rather than ones from the past.

“Motivation isn’t about what happened last year.  It’s about what we’re going to do this year,” said Bakoulis.

However, the results of the game was the deciding factor if the Wildcats would move onto the Quarterfinals. It was all or nothing for Bakoulis’s Wildcats, and it was the final chance for the seniors to prolong their time in the red and white.

“You’ll see them in the locker room, at the end of the game, no matter what happens,” Bakoulis stated. “They’ll be sitting in that locker room a little bit longer, holding onto that helmet a little bit longer. They’re going to be a little bit slower to leave the locker room, and they savor those moments. For some of them, it’s the last time they’ll ever be on the field with a helmet on.  What I hope for all of them, is that they take a moment to appreciate everything they did for the program and what they did for themselves.”

“You don’t want to let anyone down after everything they’ve done for you,” Andruskiewicz said. “They’ve put in so much effort for you, so you just don’t want to give them a bad performance.”

Family means everything to the Wildcats.  So much so that they refer to themselves as “one.”  The NFA football program is known as “Nine Units Strong.” A nickname given to the team by Bakoulis.

“The idea of nine units strong is every single one of our units is doing their part. And if [the] guys do [their] part, then at the end of the game, we don’t have to worry about what the scoreboard says.” said Bakoulis.

At the end of the day, those nine units make up one team, and that team celebrated the second straight year of victory, beating the Whalers 49-12. The Wildcats’ victory was short lived though, as they fell to the Nighthawks in the Quarterfinals the following week. Even though the 2019 season may be over, the brotherhood eagerly awaits to face their rivals for the 159th time.