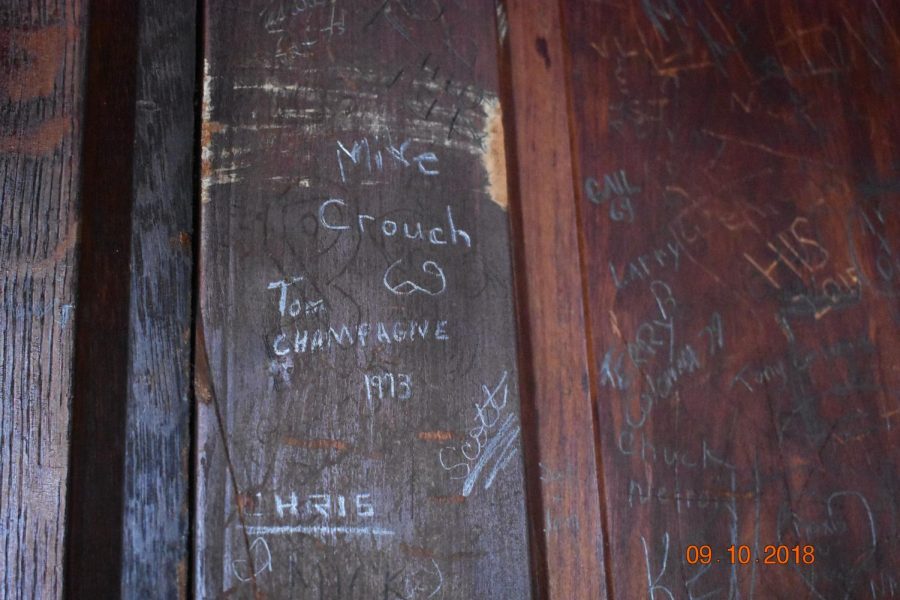 Graffiti found on the inside of Slater Tower

It’s a clear morning, and the austere Slater Tower stretches far above NFA’s pristine campus. Aside from the smartphones and Wildcat merchandise, this scene remains almost unchanged from nearly a century ago, back when the Slater was, as it remains now, one of the school’s iconic landmarks.

Generations of NFA students have walked under this edifice in the bustle to get to class, sketched its unique collection of cast plaster statues, and sat in assemblies and productions in the Slater Auditorium unaware of the magnificence that towers above them.

Few graduates; however, have ever ventured into the tower itself in recent years.

Vivian Zoë, Director of the Slater Memorial Museum, believes that the tower was closed off to students due to disciplinary problems, and the graffiti, which covers the tower’s door and window sills, suggest that students once had access to it. The relative secrecy which surrounds the tower and its prominent role in the history of the school establish it as part of the hidden NFA: the parts of campus typically closed off to students, but which help to express the true spirit of the school.

The tower was closed off as early as the late sixties, when NFA alumnus Mike Crouch ‘69 carved his name and class year into the heavy wooden facade of the door.

“I took a lot of art classes back then. . . One day I snuck up there and thought it would be cool to carve my name. I think it was closed at the time. So basically, I defaced private property. Forgot all about that,” he explained.

The students behind the other signatures and declarations of love bear testament to 133 years of history.  Although the tower itself is no longer open to the student body, it stores the blue lights used for the Light it Up Blue autism awareness event every April and the wireless bridge connecting the Sachem campus to the main campus.

However, the tower still affords a fantastic view. It is one of the only places on campus where one can see the roof of the Cranston tower, and the students waiting for their buses appear doll-like below. Pigeons, their silhouettes blurred gently around the edges from the grimy windows, roost in the alcoves of the tower.

The tower may no longer be public, but its relevance to the school and generations of students educated beneath it endures.

A quick elevator ride into the basement reveals another hidden treasure of the Slater museum: the museum collections storage and archives, which rest directly beneath the school logo in the Atrium.

The Collection Coordinator, Barry Wilson, has access to the most unique parts of NFA’s history, ranging from a 1985 color guard uniform to the donated academic awards of former students (including that of William A. Slater himself). Wilson has been working as a volunteer in the museum since 2011.

“As the Collection Coordinator I receive, photograph, document, and many times research items that are donated to the museum,” explained Wilson.

The vast majority of these artifacts, including a ballot box from the Norwich City Hall (an anonymous form of voting used to blackball members) and numerous pieces of historical furniture are from Norwich or were donated by Norwich residents.  However, a fair portion of the collections, originates far beyond southeastern Connecticut.

A replica of a Chinese terracotta warrior sits in the corner of the room, along with artwork and pottery from all over the world.  In one rack rests an overskirt of a wedding dress from the 1700s; in another, aged oil paintings accumulate hairline fractures with each passing decade. An entire drawer is devoted to foreign fans.

Wilson favors the carved animals hidden on the outside of the museum-another one of NFA’s hidden treasures.

Many students have noticed the stone owl perched on the side of the building in passing, but what many fail to see are the other animals hidden in the columns and corners of the stone steps which lead to the auditorium.

Devlin Hawkins ‘20, stated, “This is my third year at NFA and I’ve only ever noticed the owl. Once you know that they’re there, they’re so interesting to look at but so easy to miss on first glance.”

“We have our owl over the front entrance of the museum that was designed to represent the wisdom that was gained  inside, however the small carved animals on the outside (and inside) of the museum are fun pieces that were left to the imagination of the stone carvers when the museum was built.  Each is a small display of the craftsmanship of the people that put this place together in the 1800’s . I wish that I could meet them and learn about the men and women that did this beautiful work,” said Wilson.

If you look closely enough, you can see two lions, one stylized; a crab; and a frog resting unobtrusively in the crevices and corners of the museum.

Rushing from Latham to Tirrell or Cranston to Bradlaw between channels, few students take the time to truly observe the campus.  But it they stop to take a closer look, they will see that poignant pieces of NFA’s history are all around them.