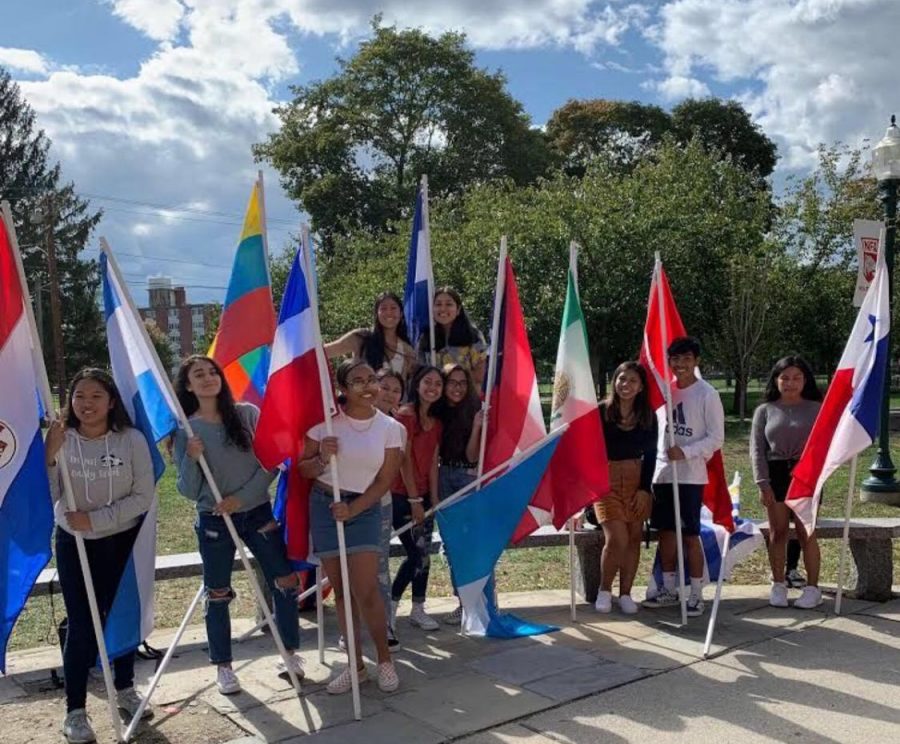 NFA students display their Hispanic pride and heritage by showing the flags of their countries.

Celebrated from September 15 to October 15, Hispanic Heritage Month celebrates the histories, cultures and contributions of American citizens who originate from Central and South America. At Norwich Free Academy, a diverse school of hundreds of cultures, Hispanic pride is very important.

“Hispanic Heritage Day was created by two Latino students, Caitlin Contreras and Liliana Lorenzo Concepcion, that have since graduated and wanted to recognize our heritage. They wanted their peers to realize how many of us there are and how many places Latinos are from. They are from every single country in South and Central America, mostly Mexico, Guatemala, Peru, Puerto Rico, and the Dominican Republic,” explained Head of the World Language Department, Maria Crooks.

Hispanic Pride Day at NFA originated from student response to a natural disaster in 2017.

“It all started after Hurricane Maria devastated Puerto Rico and a group of Puerto Rican students made t-shirts, took pictures, and invited newspapers [to their fundraiser]. They showed solidarity and gave awareness of the need after the hurricane,” stated Mrs. Crooks

Hispanic Heritage Month was started in 1968 by President Lyndon B. Johnson to recognize important Latino contributions to not only American culture, but also in every aspect of the world. Supreme Court Justice Sonia Sotomayor, baseball player Alex Rodriguez, and reporter Jorge Ramos are a few of the Hispanic icons that are celebrated during this month.

“[The creation of the club is] important because although there are many Hispanic students that attend NFA, they are not really represented in their own way,” stated club officer, Valerie Jacqueez.

Ethnicity is a crucial part of one’s identity because it represents one’s origin story and their family’s history.

“We have all immigrated from another country, so carrying this identity with us is very important to continue our legacy with our families and expand our community beyond our countries and teach other people about our culture,” commented club member, Valeria Yraaita.

At NFA, Hispanic students celebrated their pride by wearing shirts with their countries’ colors on them and waving their vibrant flags on campus on October 4. This celebration also included education about the history of Hispanic Heritage Month and Hispanic music. Across the United States, people celebrated their month by teaching others about Hispanic role models, eating traditional foods, and making cultural art.